In the academic year 2014, I created the programme of Public Lectures in Mathematics in Oxford with the help of Dyrol Lumbard. Initially, we started with a few lectures. The Hooke lecture for Applied Mathematics and the Titschmarsh lecture in pure mathematics. Quickly the popularity of these lectures grew and we now have a thriving programme with around 6-10 events a year and special lectures such as the Christmas lecture and the Penrose lecture. These lectures take place in our main seminar room that can host 360 people. Most of the talks are recorded and can be found online here. Some events are streamed live and have attracted considerable attention on the internet (with some reaching over 100,000 live viewers). For the talks, we produce high-quality posters to attract people’s attention and to give a sense of unity and continuity in the programme.

I always liked the spirit of Hooke who had to present a new phenomenon of Nature at each gathering of the newly founded Royal Society by the end of the 17th Century. So, I decided to create the Hooke lecture in his honour as our flagship Applied Mathematics Lecture. The idea behind this lecture is to show applied mathematics in action through discussion and demonstration. The inaugural Hooke lecture was a masterful talk by Prof. Jim Murray on 3-headed monsters (see talk here). For this occasion we brought from the natural history the skeleton of lizards for live viewing. Since then we have had wonderful lectures by Gabor Domokos, Tadashi Tokieda among others. 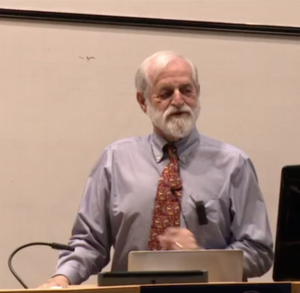 The inaugural Hooke lecture given by Jim Murray in March 2004

The aim of the Titschmarsh lectures is to bring top mathematicians to present their views on the latest and most exciting works of current (or past) mathematics.
The inaugural lecture was a beautiful talk by Cédric Villani based on his popular science book Birth of an Idea. 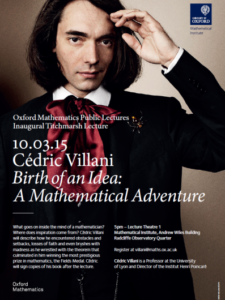 The inaugural Titchmarsh lecture was given in March 2015.

In agreement with Roger Penrose, we created a series of lectures that would match his extraordinary range of interests. It quickly became clear that an ideal candidate to give the inaugural lecture was Stephen hawking, a long-time friend and collaborator of Roger. Organising an event around Hawking was no small feat and took us over a year of planning. But the effort was well worth it. The event memorable for all involved and a fantastic success. Sadly, it would be the last public lecture given by Stephen Hawking. 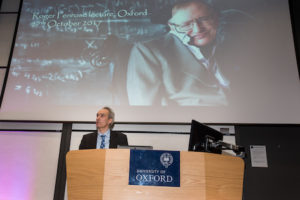 Introducing the Penrose Lecture given by Hawking in October 2017

The room was packed and the audience mesmerised.